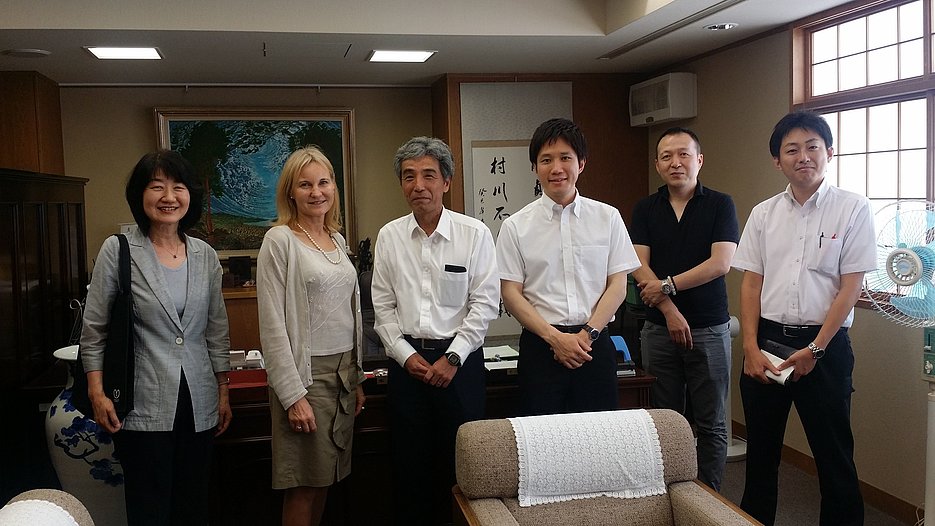 Cooperative methods of learning such as partner or group work are meanwhile part of daily teaching routines at many schools. But how effective are these forms of learning? Everyone knows the effect that occurs within a group when some members take the reins and ignore other members they consider less capable. Another frequent phenomenon are the “free riders” who lean back and let others in the group do the work for them. This raises the question of how school children experience group work with peers in cooperative learning methods and how they assess these methods. This topic is currently being investigated by the project “Cooperative Learning in Japanese and German Elementary Schools” that was initiated by the KU Chair of Elementary Education and is led by Prof. Dr. Klaudia Schultheis and Prof. Dr. Yuri Ishii from the Department of Education for International Understanding at Yamaguchi University in Japan. The project has a duration of two years and is supported by the German Academic Exchange Service (DAAD) in the PAJAKO program line with € 45,000.

Relevant international studies on the effectiveness of cooperative forms of learning are now 20 years old and recent meta-studies have revealed discrepancies in the results. In addition, there are virtually no qualitative studies that would allow drawing conclusions regarding school children’s experiences and evaluations with and about social learning with peers in groups or in individual work. “We do not know to what extent elementary school children may feel disadvantaged or motivated by group work scenarios. To date, there is little knowledge about how differences in gender and performance affect the work with partners or in the group seen from a subjective perspective of the children, or which factors stimulate or impair their interest in the learning content and which aspects of partner or group work have a motivating or demotivating effect”, says Professor Schultheis.

Especially in view of the rise of digital media in classrooms, we have to reformulate existing questions. Learning with computers, tablets and the internet is often done individually. Both individual and social forms of learning with digital media are currently developing in practice based on existing experiences. In this context, it would be important to take into account knowledge on pupils’ experiences that would allow drawing conclusions about individual and social learning processes in classrooms. Another question in this respect deals with the topic of inclusion in heterogeneous classes. How do children with impairments or children with a migrant background experience the different social forms of teaching? Gender differences also play a major role in this context: Do elementary school children prefer working in mixed-gender or homogeneous groups and what reasons do they give for their preferences?

The international comparison between Japan and Germany is interesting because Asian pupils, including Japanese pupils, achieved a much higher performance level compared to German students in the TIMSS study, but also, for example in the Michigan studies or the ‘Scholastik’ elementary school study. This can be traced back to the fact that Japan is strongly characterized by a problem-solving teaching methodology that explicitly encourages students to ask questions and develop solutions and thus actively involves them in the development of a topic. At the same time, public schools in Japan focus on creating an atmosphere of collective and cooperative harmony, which contradicts the competitive orientation of the preparatory and follow-up schools attended in the afternoon. Furthermore, we have to ask the question as to what role the high appreciation for upbringing and education, for the willingness to make an effort and motivation to learn play in a country like Japan, which is strongly influenced by Confucianism and collectivism. Incorporating social and cultural backgrounds in the investigated question makes comparing the two countries particularly interesting.

Two studies are currently being carried out together with Japanese and German students and early-career researchers in the context of the project that is also supported by Dr. Petra Hiebl and Dr. Sina Westa, who both work at the Chair. The aim is to obtain information on the children’s subjective view of frequently used social forms of learning in school in order to be able to draw conclusions for optimizing the planning of lessons and thus improving the quality of teaching. From a methodical point of view, the study combines a quantitative with a qualitative approach: A blended learning course is implemented for methodological training of the students. Here, the current project takes up results from a previous PAJAKO project in which a concept for joint international learning was developed as part of the “International Project (IPC)”. The project promotes the principle of research-based learning and the internationalization of teacher training at both universities and offers networking opportunities for post-doc and early-career researchers from both countries.