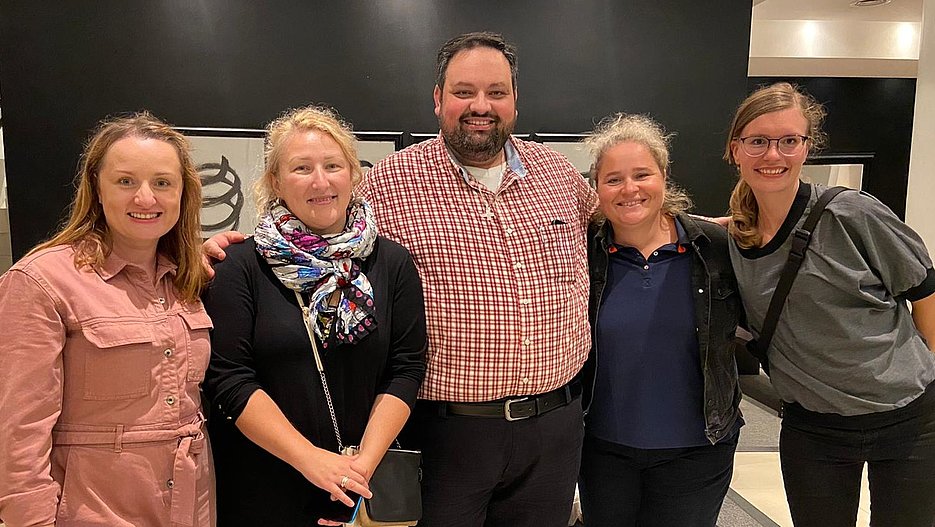 Since 2020, the KU has been one of seven worldwide hubs for the dissemination and promotion of service learning at Catholic higher education institutions. Now, the representatives of the different hubs have come together in Buenos Aires to exchange views and pave the way for the future. Also KU employees attended the conference.

The project coordinator for service learning at the KU, Christiane Hoth de Olano, and Dr. Ulrike Brok, employee at the KU Department of Education Innovation, represented the KU at the one-week conference in the Argentinian capital. The Center for Solidary Service Learning (CLAYSS), which is based in Buenos Aires, had invited international representatives of the service learning hubs to exchange views on project Uniservitate’s achievements to date and to develop perspectives for the years to come. The Uniservitate project that is funded by the Porticus foundation has the aim of systematically anchoring service learning offers at universities. Service learning describes educational offers that link civic engagement with subject-specific learning.

Being a “committed University” in the field, the KU wants to focus on “learning by involvement” and make it one of its core pillars. For two years now, the KU has been the responsible coordinating institution for the regional hub for Central and Eastern Europe and the Middle East. Alongside the KU, this regional network includes the Catholic universities in Lviv (Ukraine), Lublin (Poland) and Bethlehem. All four Catholic universities of the hub attended the conference in Buenos Aires. At the conference, members of this regional hub had the chance to exchange ideas among each other, but also to make contact with representatives of other hubs. Participants discussed the conditions and requirements of service learning in the different regions and set new impulses for the future.

For the region Central and Eastern Europe and the Middle East, the Russian war of aggression against Ukraine and the conflict in the Middle East were named as two challenges. On the occasion of a two-day international service learning conference that followed the meeting of the Uniservitate hubs, the representative of the Ukrainian Catholic University in Lviv, Olha Mykhailyshyn, gave a presentation on service learning and the necessity of this concept in times of war. Mykhailyshyn came to Eichstätt with her daughter shortly after the war broke out and now works for the “Mensch in Bewegung“ project.

In addition to attending the conference that was hosted for more than 400 guests in celebration of the 25th anniversary of CLAYSS, the delegation of the regional hub also visited different service learning projects in Buenos Aires. “Like this, we could also learn a lot from local initiatives in Buenos Aires. There are so many inspiring projects and we take many new impulses back to Eichstätt”, says Christiane Hoth de Olano.

The next regional hub meeting will be held in Eichstätt. The conference held on September 21 and 22 will focus on the topic of sustainability. The two-day event at the KU with the title “Transformation CAMPus” intends to bring together the topics of sustainable development and an engaged university under the roof of service learning.

More information on the planned conference in Eichstätt:
https://www.ku.de/studium/lehrprofil/service-learning-konferenz

Registration for participation is still open.