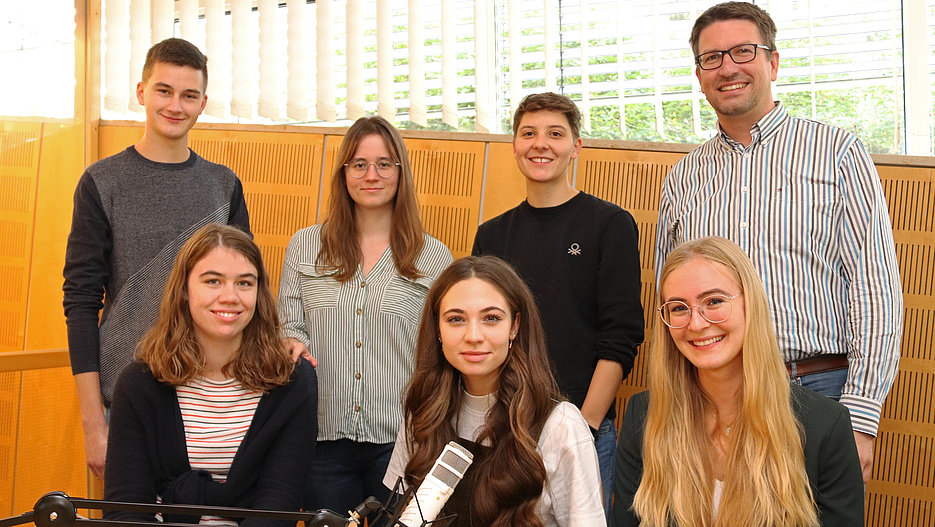 How can language solve crimes? Why do we stumble on words and occasionally trip over our tongues? And what influence do words have on what we think and how we act? These are just some of the questions investigated by students at the Chair of English Language and Linguistics at the KU. They now share their findings with the general public. However, not in the form of individual presentations or working papers, but with an English-language podcast consisting of eight episodes that is titled “LingKUistics – Language and Linguistics for everyone”.

The aspiration of the students and their seminar leader Dr. Thomas Brunner, Akademischer Rat at the Chair of English Language and Linguistics, is to deliberately avoid adopting a textbook style. "The challenge in producing a podcast for the general public is to present a topic in a way that is academically correct, but in a more natural and casual conversation. Also, the choice of topic is of crucial importance: It needs to be relevant from a linguistic point of view and meet with public interest”, says Brunner. The students selected their topics accordingly.

Student Nicole Ratz is thrilled that this seminar gave her the opportunity to develop and record a podcast together with a team for the first time ever: "What I particularly liked about the overall concept and what was most fun in the course was the close collaboration in the team and the independent selection of a topic. Unlike in courses with a theoretical orientation, we were allowed to choose our own topics from our personal fields of interest and were thus, apart from a few overarching guidelines, completely free in the design of our podcast episodes." The Scrum method used in the course to manage the project allowed the students to work on specific tasks effectively and in close exchange, enabling them to get an entire podcast with eight episodes up and running within a semester, she said. "I really hope that future students will also be able to benefit from such a great project-based seminar", Ratz emphasizes.

Dr. Brunner explained that the Scrum method as a type of project management was often used in the future professional field of the students. Using this method already during the seminar helps students in learning to correctly gauge their own work capacity and amount of time needed to complete a task. For student Benedikt Haunschild, the biggest challenge was learning the technical subtleties of podcast recording and editing of audio files: "But we got great insights as well as tips and tricks from well-known podcaster Larissa Vassilian." After really fun recording sessions in a variety of locations – Ms. Vassilian recommended the closet – the podcast teams would have recorded eight exciting episodes on a wide range of topics from linguistic perspectives. Haunschild is certain: "The result is worth listening to!"

The first episode of the podcast, which has now been released, focuses on forensic linguistics. Under the motto "Everything you write can be used against you", the episode deals with the analysis of the authorship of texts. This was used, for example, in one of the FBI's most famous criminal cases. But how do forensic linguists proceed? Two students from the seminar talked about this with Dr. Sabine Ehrhardt, who heads the Language and Audio Department of the Forensic Institute at the German Federal Criminal Police Office. The other seven episodes deal, among other things, with the question of which British accent is considered particularly attractive, whether English is really a comparatively easy language to learn, and what connections there are between gender and language use.

A new episode of „LingKUistics“ will be released online every Tuesday at https://lingkuistics.podigee.io/.