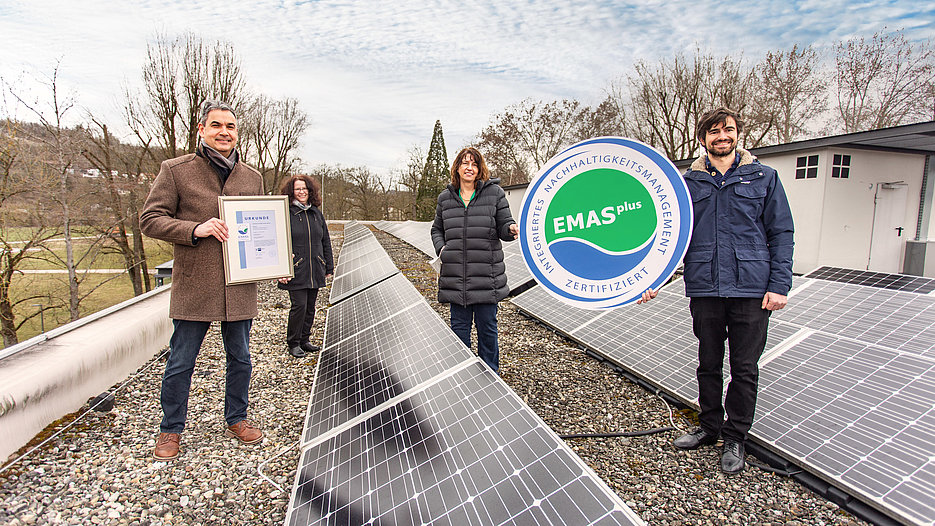 For the second time, the KU has been successfully certified for its sustainability management in accordance with the "EMASplus" standards. The KU is still the only university in Germany to have received a certification for having implemented the associated comprehensive standards. Compared to the regular "Eco-Management and Audit Scheme" (EMAS) of the European Union, this elaborate auditing procedure, which the KU undergoes voluntarily, extends environmental management criteria to also include social and economic aspects. This entails an obligation on the part of the KU to have economic, ecological and social effects systematically reviewed by external parties on an ongoing basis and to continuously optimize them. For example, compliance with human rights is ensured by a procurement guideline. When purchasing equipment or office materials, the KU involves suppliers and contractual partners in order to comply with ecological and social standards. In addition, the certification requires that the KU has a holistic system for sustainability management in place.

"EMASplus fits in with the values and goals of our University, which is committed to sustainability. We understand this topic as one that must be applied across all areas of the University. After all, every institution bears responsibility for the environment and society through its actions", emphasizes KU President Prof. Dr. Gabriele Gien. For Vice President Prof. Dr. Klaus Stüwe, who acts as the central contact person in the Presidium for sustainability as a cross-cutting issue, "the certificate reflects a culture that has grown over the long term and which students, employees and lecturers alike help to shape." For the KU's sustainable development coordinator, Prof. Dr. Anne-Kathrin Lindau, this is also a unique characteristic compared to other higher education institutions and universities: "With its holistic understanding of sustainability that extends far beyond only environmental aspects, the KU is a pioneer in Germany. It is also an outstanding factor that the topic of sustainability has been supported for many years by our University Management and strong student commitment. This is clearly a head start over other universities."

The KU has received several sustainability awards from the German UNESCO Commission and played a key role in initiating the "The Bavarian Network for Sustainability in Higher Education”. The KU's expertise is also the background to its current participation in a project of the German Federal Environmental Foundation (DBU), which is developing criteria and indicators to make sustainability in higher education comparable. While the Catholic University has already been publishing an annual sustainability report since 2012, only five percent of universities in Germany currently produce such documentation, according to the DBU. In addition, such documentation varies considerably, as there are no uniform evaluation systems on a national level to date. The KU will now contribute to the development of such systems.

This will also include an expanded understanding of sustainability, which is also reflected in the KU's new overall sustainability concept, which was adopted last year. While the 2010 version still covered the three areas of research, teaching and campus management, the updated concept that extends to the year 2030 now also defines additional goals for the areas of governance, transfer and student initiatives and engagement. The concept can be seen as a long-term strategy for increasing the awareness for sustainable development topics among KU employees and students as future decision makers.

"Even before we set out on the path for the first EMASplus certification in 2019, we pursued an approach that goes beyond purely environmental aspects. The fundamental challenge of the certification is to permanently systematize relevant processes for the KU as an overall organization and to further develop criteria that also make social aspects measurable", explains Johannes Baumann. As head of the environmental management department at the KU, he is responsible for the certification process. The self-image of sustainability is also directed inwards – for example, through the establishment of a health management system or in relation to the participation opportunities for students, which are for example offered by the new Green Office. In the medium term, Baumann says, the KU wants to become a climate-neutral institution. The KU's carbon footprint is currently being analyzed – including emissions on campus or the question of which means of transport KU members use to get to the University. The findings will primarily be used as a basis for developing further measures to avoid emissions – for example, through an internal car-sharing platform – or to compensate for them.

Further information on the University’s commitment for sustainability is available at www.ku.de/nachhaltigkeit.