The KU has two compact, green campuses, one in Eichstätt and one in Ingolstadt, both of which are located close to the town centers. The University᾽s buildings display a unique mixture of baroque and modern architecture. The KU’s buildings were planned according to the campus principle and are situated on the edge of the old town in both Eichstätt and Ingolstadt. This saves time and avoids stress, as everything you need is just a few minutes’ walk away: seminar rooms, the library, computer work stations and canteens. The Eichstätt campus is also just around the corner from the town’s main square.

There are several green spaces on campus where you can spend time between lectures and seminars. In Eichstätt the Hofgarten is the green heart of the KU – a park where you can relax and find inspiration, play frisbee or do a bit of slacklining. The Kapuzinergarten is also a good place to unwind. It is also used by several student initiatives for their projects. The campus in Ingolstadt, home to the Ingolstadt School of Management (WFI), consists of one large and one smaller building separated by a peaceful courtyard. If you prefer to spend your breaks in town, Ingolstadt’s city center is just a few minutes’ walk away. Other buildings at the Ingolstadt campus include the 'Studentenhaus' and the 'Hohe Schule', which was home to the first Bavarian university in the 15th century.

Masterpieces of baroque and modern architecture

The KU’s architecture is truly unique. Historic eighteenth century buildings such as the former summer residence of the prince-bishops, a former riding school and a former orphanage are now used for lectures and seminars and the offices of the University Administration. Today’s interesting mix of old and new was created by architects Karljosef Schattner and Karl Frey who added concrete, glass and metal to the baroque buildings, making Eichstätt home to some outstanding modern architecture. The Main Library, designed by star architect Günter Behnisch, is a masterpiece of glass and steel situated on the green banks of the Altmühl river. 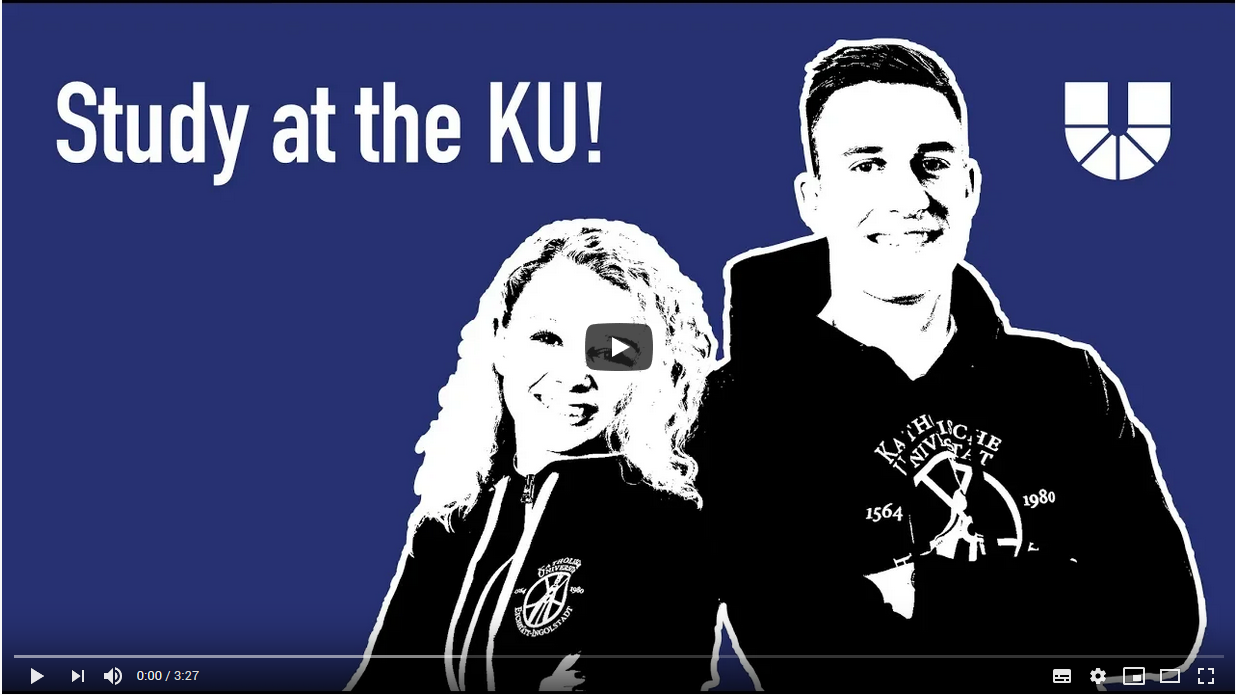 Please note: By clicking on the image area, you give your consent for video content to be reloaded from YouTube, for YouTube/Google cookies to be stored on your IT system and for personal data such as your IP address to be passed on to Google. If you click on another video after having finished watching the video content, YouTube will open in a new tab of your browser and will collect more data from you. Further information is provided in our data protection notice and under Google Privacy.

It may not be a big city but Eichstätt still has plenty to offer with a range of pubs, beer gardens, clubs, and concerts, as well as a theater and a variety of activities organized by students. Ingolstadt is just a 20 minute drive away. The city offers culture lovers an excellent theater, a wide range of concerts, and traditional beer festivals. The KU also runs a variety of sports courses and has its own choir, big band, theater group, and much more.