Cab in the Sky: How Potential Passengers Rate the Mobility of the Future 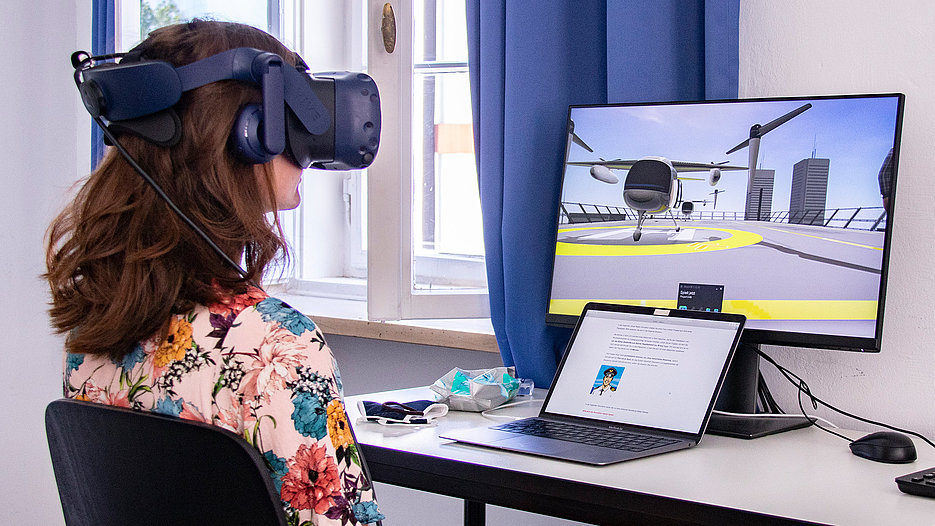 What factors influence the acceptance of air taxis and how do test persons evaluate this autonomous means of transport after a virtual flight? The Chair of Service Management of the KU has looked into this in a study with almost 300 participants. Part of the "GABi" research project, the study conducted by the KU analyzes attitudes towards air cabs in cooperation with the city of Ingolstadt and the brigk digital startup center. More than 90 percent of all participants generally think that air cabs might be useful and that putting them to use would be a good idea. Two thirds of the test subjects agreed that air taxis would suit their personal mobility profile.

Background to this project funded by the Federal Ministry of Transportation is the EU initiative “Urban Air Mobility”, which was implemented in order to explore and to test the potential of regional passenger transport by air cab.  Three years ago, the city of Ingolstadt set out with partners from industry and science, one among whom is the KU, to develop and investigate appropriate concepts. “We are paying special attention to social aspects and to the issue of acceptance of this form of mobility in the population”, Frederica Janotta explains. It was in her capacity as research assistant of the Chair of Service Management that she conducted the empirical study.

Since testing air taxis in the real world is currently still not an option, the study used a virtual reality simulation thereby allowing participants to experience a ride in an air cab from a passenger’s perspective. Such three-dimensional representations enable a realistic vision of new technologies thus allowing scientists to assess acceptance and specific aspects of the user experience. In addition, it is one way to ensure that all participants are having the same flight experience, which makes results more easily comparable. On average, respondents were 30 years old, with the oldest participant being 80 years of age. The random sample had a balanced distribution of men and women.

Before test subjects were allowed to take off, they were once more instructed about Urban Air Mobility and informed that their virtual flight would last ten minutes and cover a distance of 30 kilometers between the city center of Cologne and Bonn's main train station. After “touching down”, participants were asked to complete an online questionnaire, that took into account prior knowledge, attitude toward air cabs, perceived risk, and willingness to pay.

“The overall results show a largely positive attitude toward Urban Air Mobility and related services”, Frederica Janotta reports. According to her, this is particularly surprising considering the early stage of the technology and the current low level of awareness among the population. Since all the results indicate that a better level of awareness and a positive attitude toward air taxis will significantly increase individual willingness to use them, the researchers recommend future service providers to emphasize the specific advantages of air cabs compared to existing modes of transportation. In addition, the researchers would recommend giving potential users the opportunity to familiarize themselves with this new technology and transport method at an early stage - in particular by offering product demonstrations and test flights.

The majority of participants were confident about putting their trust in the autonomous system. This is also reflected in the fact that two-thirds of the respondents are quite resolved to use air cabs should they become available in the future.  As take-off and landing sites in the urban environment they would prefer train stations, airports and park and ride lots. On average, the study participants were willing to pay around 50 euros for the flight they experienced. They described this form of transportation as an efficient way to travel and particularly enjoyed the view. The fact that air cabs are designed as autonomous systems without a human pilot, about a quarter of respondents thought would "take some getting used to." Many of the test subjects would prefer a safety briefing before takeoff, an emergency button, and more information on flight status. "Such comments indicate that trust in automation is one of the biggest challenges for the widespread introduction of such services," sums up Prof. Dr. Jens Hogreve, tenured professor of the Chair of Service Management.

As far as the supposed noise pollution caused by air cabs was concerned, participants were of two opinions: 43 percent expected an increase in noise pollution, whereas just under 45 percent did not anticipate any negative effects. The result concerning a possible increase in air pollution due to air taxis was similarly balanced.

For detailed results of the study please see the homepage of the Chair of Service Management www.ku.de/wfi/dlm