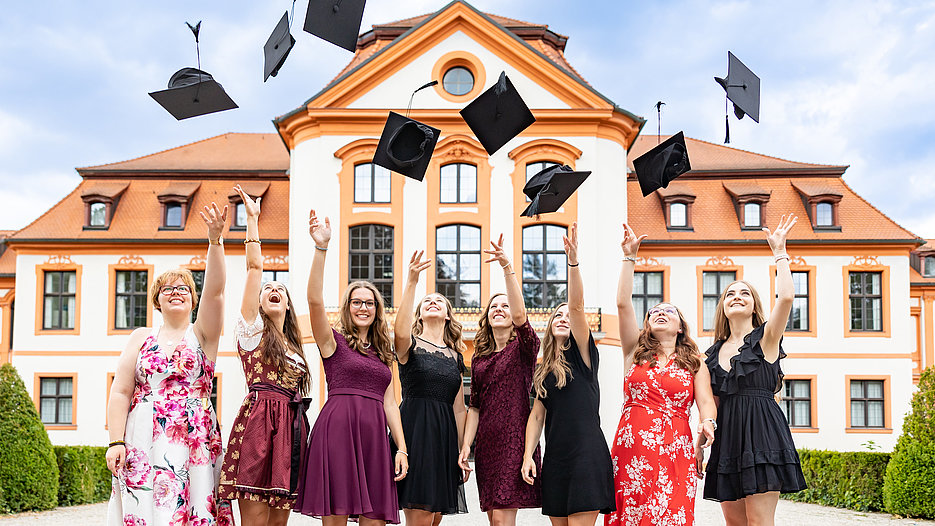 Overall, KU graduates are significantly more satisfied with their studies than alumni from other Bavarian universities. This is the result of the latest Bavarian graduate survey (BAS), which is conducted annually by the Bavarian State Institute for Higher Education Research and Planning. In many areas, the KU received better ratings from former students than the ratings that alumni gave on average for the other Bavarian universities.

For example, KU graduates said that their degree programs were characterized by a better interlinking of theory and practice (share of those who voted “very good” and “good” 55 per cent for the KU versus 37 per cent in comparison with all other universities) and a better orientation of the teaching program regarding the requirements of the professional practice (51 per cent “very good” and “good” compared to 39 per cent at a Bavarian level). Looking back on their studies at the KU, four out of five graduates (79 per cent) are pleased or even very pleased with their studies – only an average of 73 per cent of their fellow students at other universities in Bavaria came to this conclusion.

Graduates who participated in the survey particularly praised subject-specific support and advice: 78 per cent said that the KU was doing a very good or good job in this respect, while the Bavarian average only amounted to 61 per cent of former students who experienced their everyday study life in this way. As regards study organization, the KU also received above-average results compared to other institutions – for example regarding appropriate balancing of workload, international offers, timing of lectures or feasibility of studies with internships or jobs.

Compared to other survey participants, KU graduates were also more satisfied with the acquisition of key competencies or rhethorical skills: The promotion of their ability to express themselves was graded as very good and good by 68 per cent of former KU students – the Bavarian average was 57 per cent. Teaching of oral presentation skills was rated as being good or very good by around three quarters of KU graduates (76 per cent), while only 56 per cent of other graduates rated this way. These results underline the self-conception and image of the KU that seeks to design its teaching practice in a discursive, interconnected and committed way tailored to the needs of the individual.

The most recent graduate survey also mirrored the KU’s efforts for an international design of its study offer. 37 per cent of people questioned stated that their degree program included a stay abroad. The average at other universities amounted to just under 30 per cent. However, due to the ongoing corona pandemic, the amount of students spending study time abroad has declined compared to previous years – both at the KU and other Bavarian universities. Before corona, 40 per cent of graduates stated they had integrated a study stay abroad in their program.

The survey also found that more than half of KU graduates questioned engaged in voluntary commitment during their studies (56 per cent). There is no Bavarian comparison for this, as this question was only asked to KU graduates participating in the survey.

For the current evaluation, around 7700 former students who graduated from one of the Bavarian universities and higher education institutions between 2019 and 2020 were surveyed. The Bavarian graduate survey provides universities with data for quality assurance and degree program planning. The questions are jointly determined by the Bavarian State Institute for Higher Education Research and Planning together with the universities to ensure comparability. The new study once again confirms the high quality of study and teaching at the KU, which has not only been noted by BAS for years, but also by the CHE university ranking, for example. Earlier this year, the KU was also once again awarded with the title “Germany's most popular university” by the student portal Studycheck.de.

At the KU, students starting in the winter semester can choose from a broad range of programs, also without having to submit a prior application. The KU’s course offer for programs without admission restrictions includes more than 40 programs and subject areas for which interested prospective students can easily enroll online on the KU website. The deadline for enrollment is October 7.

More information is available in German at www.ku.de/entdecke-die-ku.