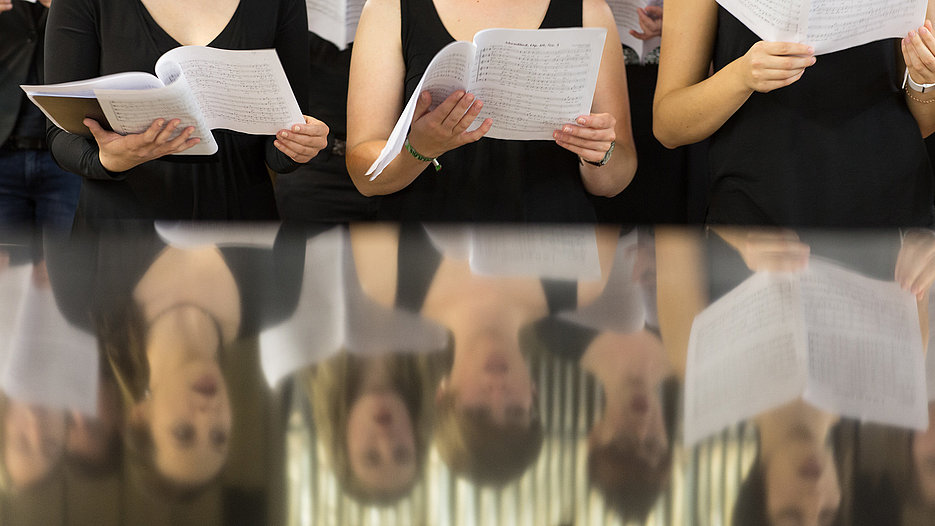 Declining membership numbers, financial worries and not enough young talent: Only one year into the pandemic it has become apparent that the choir scene in the German-speaking world has suffered considerable damage as a result of the restrictions that come with the covid pandemic. In addition, choirs fear their membership numbers will continue to crumble in the time after the crisis. This is the conclusion of a study conducted by Prof. Dr. Kathrin Schlemmer, who holds the professorship for musicology at the KU. Within a short period of time, more than 4300 choirs in Germany, Austria and Switzerland have participated in the online survey. Co-authors of the survey are church music director Tobias Brommann (cathedral cantor at Berlin Cathedral), Prof. Jan Schumacher (university music director, Goethe University Frankfurt/Main), and Ester Petri and Dr. Johannes Graulich, who head Carus-Verlag in Stuttgart, the leading publishing house in the field of choral music. The team of researchers has released some first results of the online survey on choirs in the current issue of the “neue musikzeitung” (nmz).

With more than four million active singers in Germany alone, choral music is one of the pillars of amateur music. The study "Chormusik in Coronazeiten" (ChoCo; "Choral music in Corona times") documents for the first time the critical situation in this field with regard to all essential aspects of choral work. "The number of active singers in the choirs surveyed has declined significantly during the pandemic. Only less than one third were able to maintain their original membership numbers. The loss is particularly pronounced among the more than 580 junior choirs that were surveyed. Of these, in fact, almost one in eight children's and youth choirs no longer exists," reports Professor Schlemmer.

Almost 60 percent of all the ensembles surveyed expect their numbers will not reach the before-pandemic level even after the pandemic will have disappeared. Fifteen percent even fear a significant decline in interest from singers due to the long forced break.

Despite numerous creative approaches to corona-compliant choral work – for instance through digital rehearsals, singing outdoors or in larger rooms – only a small proportion of ensembles will be reached. At the same time, these rehearsals are associated with an enormous additional effort for those responsible. The evaluation of the questionnaires also revealed that the quality of the ensembles was noticeably declining as the number of members and rehearsal and performance opportunities were greatly reduced. More than half the choirs saw their own current musical condition negatively, as well as their mental state. Only the spirit of solidarity within the choirs paints a less negative picture, with one in two choirs still seeing solidarity as an asset of their group.

Professor Schlemmer is particularly concerned that team spirit has suffered greatly, especially among young choirs. “By nature they are already subject to a greater amount of fluctuation than adult choirs due to their members’ school schedules and vocational training. As a result, children’s and youth choirs always have to be on the lookout for new talent. They are especially susceptible to interruptions.”

One in three choirs estimates their financial situation to be rather or even very insecure, since they no longer have their usual sources of income, such as proceeds from concerts. Another 20 percent of choirs expect they will face financial hardships in 2021 or 2022. As a consequence, many choirs are no longer able to pay their directors, who often are freelancers.

Besides taking stock of the current situation, one aim of the Choco study is to identify problem areas, in order to avert any further damage to choirs. “The choirs participating in the study wish for financial aid for rapid covid tests, toward the payment of the fees of their conductors and for sheet music, as well as for contingency insurance during the current pandemic, so they can safely start training for shows again.”

All in all, the researchers judge the results to be especially concerning, as they were taken before the third wave of infection hit Germany in March. At this point, many choirs might have been expecting to be able to start training quite soon. Now, according to the research team, with no prospect of being able to resume training, the situation for choirs has been exacerbated yet again. “Choirs will not bounce back as many other areas of public life. We do not expect any normal choir activities to resume any time soon.”

Beyond the initial results now published, the team of authors will evaluate the survey in more detail in the coming period - for example, with regard to regional differences or the different types of choirs. Moreover, in addition to a standardized questionnaire, the respondents also had the opportunity to describe the situation in their own words. This data will now be further investigated.

A detailed article on the Choco study appeared in the “neue musikzeitung” (nmz) and can be read (in German) on www.nmz.de/choco