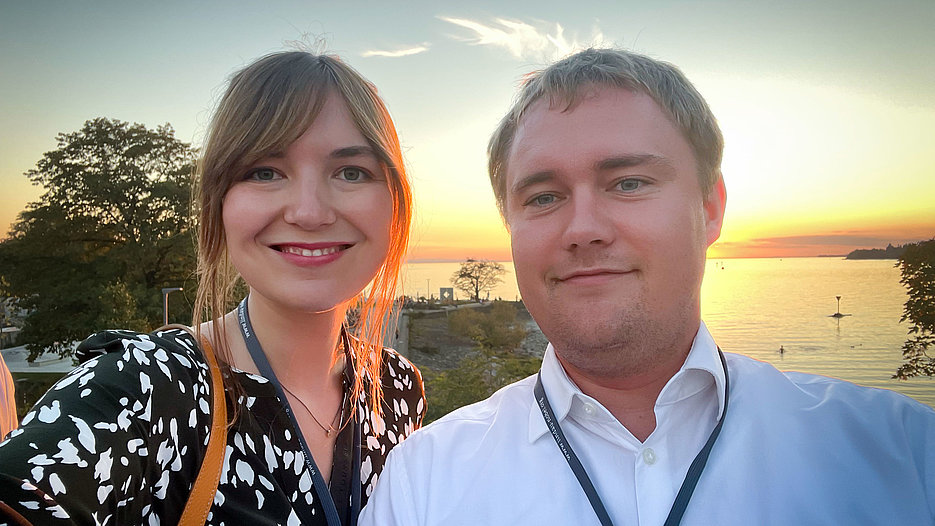 Two doctoral candidates at the School of Management, Katharina Hartinger and Philipp Krug, had the rare and honorable chance to get to know and discuss with Nobel Prize winners. They successfully completed a multi-stage application process and attended the popular Nobel Laureate Meeting in Lindau at Lake Constance from August 23 to August 27, together with 400 other highly talented young economists from 69 countries. The top scientific meeting is held in Lindau regularly since 1951. Experts in the fields of chemistry, physics, medicine and business and economics meet there in regular intervals.

Katharina Hartinger, research associate at the Chair of Economics, especially Macroeconomics, and Philipp Krug, doctoral candidate at the Chair of Economics, especially Public Finance, agree: The stay in Lindau was a unique experience that will accompany them on their future career paths. Hartinger described the conference as a “tank of opportunities”. “This week was so important that its significance will only really transpire in the course of time. We can build on the experience there and start collaboration projects or send Nobel Prize winners an e-mail when we finished a paper, for example.” The combination of different formats at the venue created many opportunities for participants to get into conversation with Nobel Prize winners and other attendees: “The mixture of presentations, a trip to the island, shared lunches and coffee breaks was planned marvelously and added a special touch.”

For Krug, the meeting in Lindau was characterized by enriching exchange. “There was fantastic opportunity for contact.” The manifold presentations and discussion panels broadened the horizon and gave attendees the chance to dive into topics that are usually less represented in their own research, thus providing room for new perspectives. Krug was especially impressed by a presentation of Nobel laureate Robert C. Merton on reforming the pension scheme. “The stay in Lindau inspired us to stay curious and brought up much interesting food for thought – especially also on current topics such as the economic effects of war sanctions or sustainable investment.”

Hartinger will in particular will remember her panel discussion on ‘Social Chance and Social Media’ where she exchanged views with Nobel Prize winners Joseph E. Stiglitz and Richard H. Thaler. “I did not know what to expect – it was a lively and controversial discussion. Despite this, I had quite a good share of speaking time.” Hartinger represented the view that social media served as a catalyst for developments that would have occurred anyway. “It takes powerful forces to bring about social change. Saying that social media were the only reason for such change would do movements like Fridays For Future no justice.” As a teacher of economics, she also took the chance to emphasize the importance of media literacy. “For me, the panel discussion was a confidence booster, to see that I could keep pace with Nobel laureates, at least to a certain extent. I can say already now that this experience has shaped my career path as a young researcher.”