Pioneer and important theologian of the present 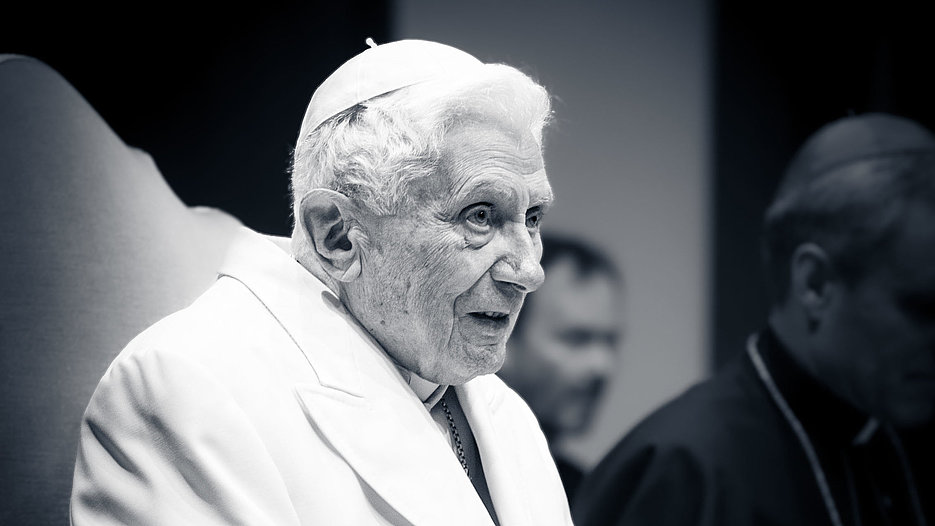 The KU mourns the passing of Pope Emeritus Benedict XVI, who died on the morning of New Year's Eve at the age of 95. Both during his pontificate from 2005 to 2013 and during his previous positions as Archbishop of Munich and Freising (from 1977) and as Prefect of the Congregation for the Doctrine of the Faith (from 1981), Joseph Ratzinger was closely associated with the KU – and he remained so even after his time as Pope.

As the then chairman of the Freising Bishops' Conference, Ratzinger had elevated the then Eichstätt College (Kirchliche Gesamthochschule Eichstätt) to university status in April 1980, forming the Catholic University of Eichstätt. Ratzinger himself had previously proposed this significant step for the University to the Holy See – as a continuation and significant expansion of a centuries-old academic tradition in Eichstätt. In the Aula of the KU, Joseph Ratzinger said at the ceremony on June 26, 1980: “My wish for the Catholic University of Eichstätt is that it will bring these spiritual origins of our culture to bear in the education sector of the present and thereby have a positive influence on the whole which goes far beyond just its teachers and students, as such powers are urgently needed in critical situations.” KU President Prof. Dr. Gabriele Gien acknowledges the significant role of the later pope in the formation and development of the KU: "Benedict XVI is an important pioneer for what is still the only Catholic University in the German-speaking world. He was a supporter, advocate and companion of the KU", says Gien. "For his great commitment in the founding phase, but also for his attachment to the KU into his old age, we may be grateful."

As Archbishop and as Prefect of the Congregation for the Doctrine of the Faith, Joseph Ratzinger was repeatedly invited to give guest lectures in Eichstätt. On November 26, 1987, he was awarded an honorary doctorate by the Faculty of Theology during the "Dies Academicus". He received the honorary title in gratitude for his benevolence and support of the University, but also in recognition of his international importance as a theological scholar, university teacher, and already at that time as the author of numerous standard works of theology. Among the guests in the packed auditorium were the then Chairman of the German Bishops' Conference, Karl Lehmann, and the then Bavarian Minister of Science, Wolfgang Wild. Ratzinger's keynote speech at that time dealt with the topic "the church as an advocate of the human being" and addressed, among other things, topics such as AIDS, drugs and terrorism. It is quite significant that the conferral of the honorary doctorate was made on the same day as the inauguration of the new building of the University Library, since Joseph Ratzinger was also known as a great reader and book lover.

"With Benedict XVI, we lose one of the most important theologians of the present day, who has decisively shaped theology and the church from the postwar period to the recent past", said Prof. Dr. Bernward Schmidt, Dean of the Faculty of Theology, paying tribute to Benedict's scholarly legacy. As a young theologian, he had been involved in "overcoming a rigid neo-scholastic or neo-homistic theology" by referring in particular to Augustine and Bonaventure and gaining new insights from their writings in terms of content and methods. As a professor in Freising, Bonn, Münster, Tübingen and Regensburg, he had influenced several generations of students between 1958 and 1977. "His 'Introduction to Christianity,' which emerged from a lecture for students of all faculties, is still one of the books that students of Catholic theology are naturally recommended to read." As an advisor to Archbishop Frings of Cologne and later as an advisor to the Council, Joseph Ratzinger contributed to essential decisions on the course of the Second Vatican Council, Schmidt said. His work as Archbishop of Munich and Freising, as Prefect of the Congregation for the Doctrine of the Faith and as Pope had often been appreciated. "Admittedly, a shadow was cast on his work in recent years due to the processing of the cases of sexual and spiritual abuse."

In Ratzinger's theological work, there is not only a wide range of topics, but also some tension fields and ambiguities. "His positions as theologian, ecclesiastical politician, prefect of the Congregation, and Pope were not always uncontroversial; they also seem to have been aimed in very different directions. But it is perhaps a characteristic of great theologians that their thinking offers starting points for engaged discussion and can open doors to further exciting reflection. Much of his thinking and work can only be classified and evaluated in retrospect over several years or decades", says Professor Schmidt.