Ploughing for sustainable development: Pilot project on school gardens as a place of learning 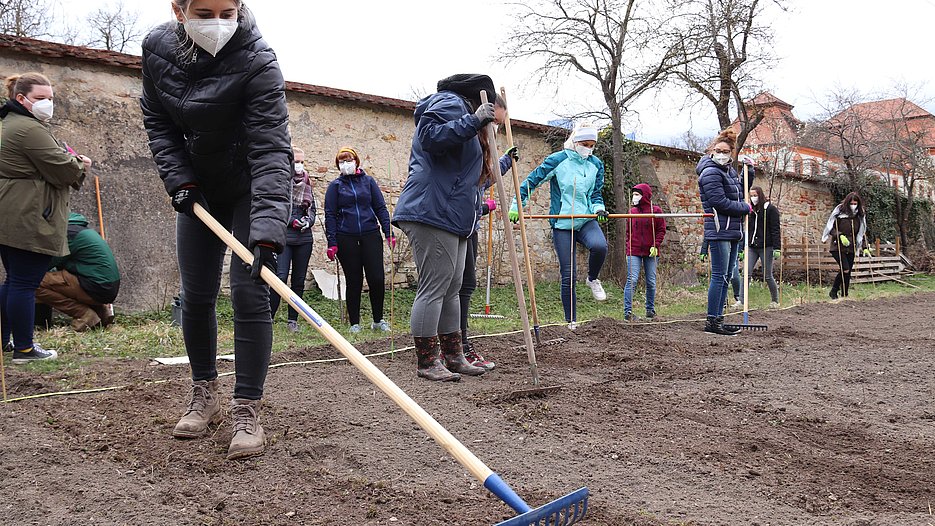 This semester, KU students will learn how to convey the joy of gardening to schoolchildren and, at the same time, raise their awareness for essential aspects of sustainable development at the "CampusAckerdemie". The practical seminar is a joint pilot project of the Zentrum für Lehrerbildung (ZLB) (Center for Teacher Education of the KU), the Didactics of Biology and the Climate Garden Eichstätt with the association "Ackerdemia".

For several years, the association has been offering a program for meanwhile more than 850 schools in keeping with the motto "A Generation That Knows What it Eats”. Classes and schools are supported in planting vegetable gardens on their school grounds. With the "CampusAckerdemie", the association is now deliberately approaching students in the teaching degree program as future multipliers in the field of sustainability. The KU is one of only three universities in Germany to offer this pilot training program. At the start, 20 students, who later want to teach at elementary schools or Mittelschule, are participating.

At the launch of the qualification program in the garden of the former Kapuzinerkloster in Eichstätt in the immediate vicinity of the campus, one statement could be heard again and again from students and lecturers: "It's nice that we can finally do something practical again!", said Dr. Petra Hiebl, vice chair of the ZLB and does not just relate this to the Covid restrictions that have been shaping teaching conditions at the university. "In times when digitalization is also a central topic for teacher training, such an offer is a nice way to counterbalance," says Hiebl. According to her, it did not take much advertising among students to attract enough participants. Hiebl goes on to say that in addition, the course fits in well with the KU's strategic goal of embedding Education for Sustainable Development more firmly in teacher training.

At the first of three practical workshops, the first task was to literally lay the ground for the seventeen beds that the students will be working on in the coming weeks. Each planting bed will combine several types of vegetables, such as kohlrabi, spinach and romaine lettuce. "Due to the weather, we will not plant cold-sensitive plants such as tomatoes until later", explained Felix Gleißner, who works as a "field coach" for the "Ackerdemia" association and runs an organic farm himself in the Fürth district. He explains that in the course of the following years, the crops will be rotated from one bed to the next so that the soil does not become depleted and diseases can be avoided.

During the current semester, the students are gaining such background knowledge not only during the hands-on workshops at the planting beds, of which they take constant care, but also via weekly Zoom meetings of the KU, as well as from customized tips provided by Ackerdemia e.V. "On the one hand, we want to get the students excited about the practical work, which they will later pass on to the next generation at their respective schools. On the other hand, however, it is also about the teaching of fundamental interrelationships in nature, the origin of foods and the issue of a healthy and sustainable diet", emphasizes Dr. Maximiliane Schumm, the head of the Didactics of Biology department at the KU. It is true that there had been a trend toward school gardens already in the 1990s. However, this had often been tied to individuals. With the revival of the topic in the course of the public debate on sustainability issues, there is now an opportunity to integrate school gardens more strongly into everyday life again.

Link for the television report of TV Ingolstadt on the launch workshop of Campus-Ackerdemia:
https://www.tvingolstadt.de/mediathek/video/pilotprojekt-campus-ackerdemie/