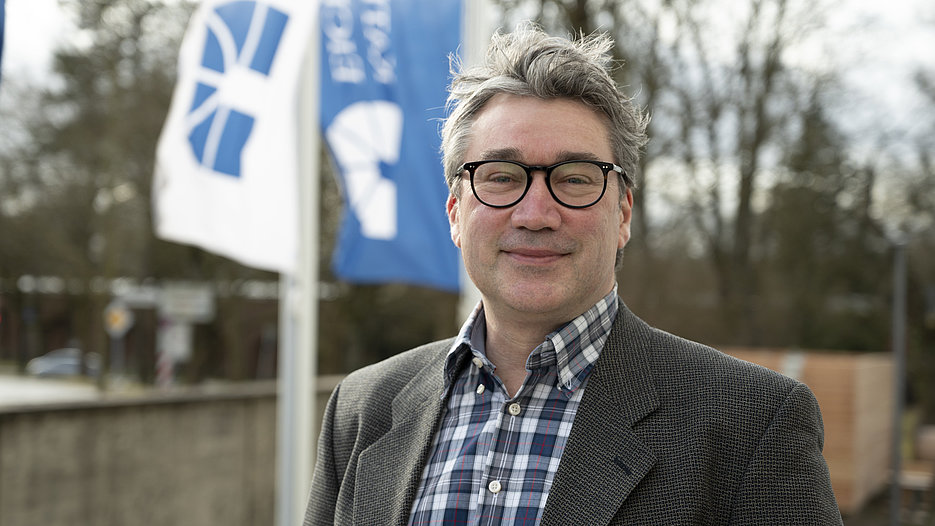 Prof. Dr. Marcel Oliver has been appointed holder of the new Chair for Applied Mathematics funded by the City of Ingolstadt. Oliver is one of a team of scientists at the new Mathematical Institute for Machine Learning and Data Science (MIDS) supported by the City of Ingolstadt with two endowed professorships. In addition, Professor Oliver is going to lecture in the new Bachelor program Data Science that is to start in the winter semester.

We have all seen this phenomenon after taking a picture: If you enlarge a section of the image, a crude mosaic of pixels will become visible on the screen. The measure of how fine this grid is we call resolution: The higher the resolution, the finer the details. This is not only true for your family photo album, but also for models used to study climate and weather. If you divide the atmosphere into cubes and assign a data point to each cube, in climate simulations this will represent an area with a length of several kilometers. “Despite ever-improving computer power, it is unrealistic to increase the resolution of these grids infinitely to be able to simultaneously calculate processes that correlate but are different in dimension or take place at different times,” says Professor Oliver. For example, weather ranges from the processes on a molecular level to the progression of annual mean temperatures. Another current issue arises from the problem that even large ocean currents get their energy from eddies so small that they tend not to show on global models.

As a result, computer simulations of complex systems necessarily only focus on sub-areas with smaller or larger scales requiring modeling. “To improve these models, I use methods from physics, computer science, and applied mathematics. More recently, I have also started including methods from data sciences. High-resolution, local simulations are used to generate data, from which machine learning methods can then be used to represent their influence on simulations that are coarser but global,” says Professor Oliver. In doing so, Professor Oliver does not limit himself to climate and weather phenomena, despite being on the board of the DFG-founded research group “Energy Transfers in Atmosphere and Ocean”: “As a mathematician I look for patterns that might be used in other areas, for instance logistics or the development of new materials. To me, it’s appealing to use a concrete problem to develop the theoretical foundations so that they can then be re-applied to the practical situation.

He profits from the fact that he studied both physics and maths. Besides the university in his home town Münster, he also attended programs at the University of Edinburgh and the University of Arizona in Tucson, where he did his PhD. In Arizona he worked on an interdisciplinary program where he collaborated with scientists from metereology, aerospace and geosciences. “Physicists tend to start an experiment when they are interested in a problem. Mathematicians, on the other hand, want to develop proof. In my opinion, scientific progress needs both approaches”, says Oliver. Before his appointment at the KU, Professor Oliver worked at the Jacobs University in Bremen after working on research projects and teaching at the University of Tübingen, the University of Southern California and the University of California in Irvine. Research projects also took him to the Institute for Advanced Study in Princeton, the French Ecole Normale Supérieure de Cachan and the Isaac Newton Institute for Mathematical Science in Cambridge.

Information on the MIDS can be found at www.ku.de/mids, for details on the new Bachelor’s degree program „Data Science“, please go to www.ku.de/ds.