The joy of giving: What sustains volunteers in emergency services 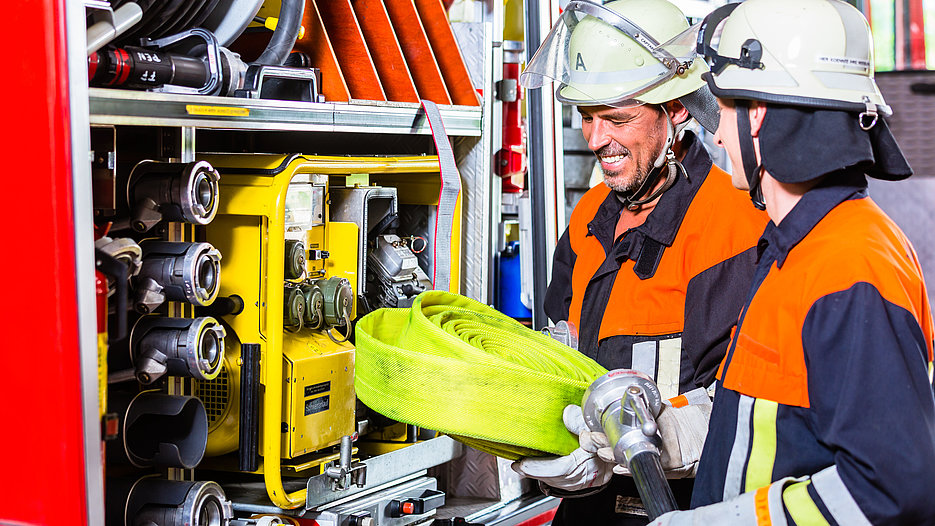 This year’s catastrophic flood in Germany has highlighted the vital role that volunteers play in emergency services. That said, what makes people get involved? And how can we get the young generation to commit to this work which is so relevant to society? This is what the team of the Chair of Social and Organizational Psychology (Prof. Dr. Elisabeth Kals) has investigated for the Ministry of the Interior of North Rhine-Westphalia.

Around 8500 volunteers and 1500 people from the general population took part in the large-scale study. The study was designed in close cooperation with the volunteers. Its findings are currently being incorporated into an image strategy that is being used in North Rhine-Westphalia to provide information about disaster management and to recruit new volunteers.

Disaster management in Germany is largely carried out by volunteers. Around 1.7 million people participate in volunteer fire departments, the Technische Hilfswerk (federal agency for technical relief) or other organizations, and in North Rhine-Westphalia alone there are more than 100,000 volunteers in this field. "The exceptionally good response rate to our survey is also an expression of the volunteers' great attachment to their work in disaster management, which they also verbally professed to us," Professor Kals says. Responses show that the average membership of volunteers is 17 years. They are committed and continue volunteering because they find joy in their work. Among other things, the respondents take pleasure in experiencing community, doing meaningful work, gaining experience and helping people. In addition, they see skills gained as part of their volunteer work as an asset for themselves and their families in case of an emergency. Furthermore, giving back to society helps improve self-esteem.

Overall, respondents only rarely talked about difficulties. In the few cases that respondents did talk of problems, above all, they described compatibility problems of their volunteering and their day job as the process by which an employer has to release their employee for their activity as a volunteer, is in part rather complicated. From the point of view of the volunteers, it would help if the general public and employers were better informed on the subject. They would also like to see more and varied training opportunities. They also feel that their work is not sufficiently appreciated and respected - if, for example, their operations are being hindered by onlookers.

The volunteers’ feelings are basically the same across all of the organizations involved in disaster management, which in NRW include the freiwillige Feuerwehren (volunteer fire brigade) and the Technische Hilfswerk, as well as the Arbeiter-Samariter-Bund, the German Red Cross, the Johanniter Unfallhilfe, the Malteser Hilfsdienst and the DLRG.

In addition to surveying volunteers, the KU psychologists also conducted a survey among the general population. This revealed that neither the structure of disaster control services nor access to these organizations is sufficiently known: "The general population has insufficient knowledge about how to volunteer in these services. As far as disaster management was concerned, the respondents tended to assess themselves as rather well-informed on average. However, their other responses showed that there are major knowledge gaps here as well." Nevertheless, they professed a fundamental willingness to do their part in disaster protection in the future. In addition, the motives and experiences of those already involved in volunteer work coincide to a large extent with the ideas of those potentially interested: They expect social involvement, opportunities to help, new experiences and a sense of purpose in their work.

A key concern of respondents in the general population was that volunteering might take up a lot of their time - competing with work and other commitments. "Here, it would be necessary to examine what more flexible forms of engagement might be developed. Participants said they could imagine initially taking advantage of taster offers from emergency services. Volunteering for a limited period of time is also conceivable for many respondents. In other words, the population is basically willing to get involved in emergency management, but to start with limited time frame," says Professor Kals.

She and her colleagues Svenja Schütt and Laura Pollack have just held workshops with the individual emergency services in NRW, in which the specific results were presented and discussed. In addition, the first training sessions for campaign ambassadors were held on the basis of the study, which will run until the end of January 2022. Ambassadors are active members of emergency services who want to recruit additional volunteers. Even if there is still a need to catch up on media advertising for disaster management, committed members of the organizations are the most important factors for finding new volunteers.

More information is available at www.engagiertfür.nrw.