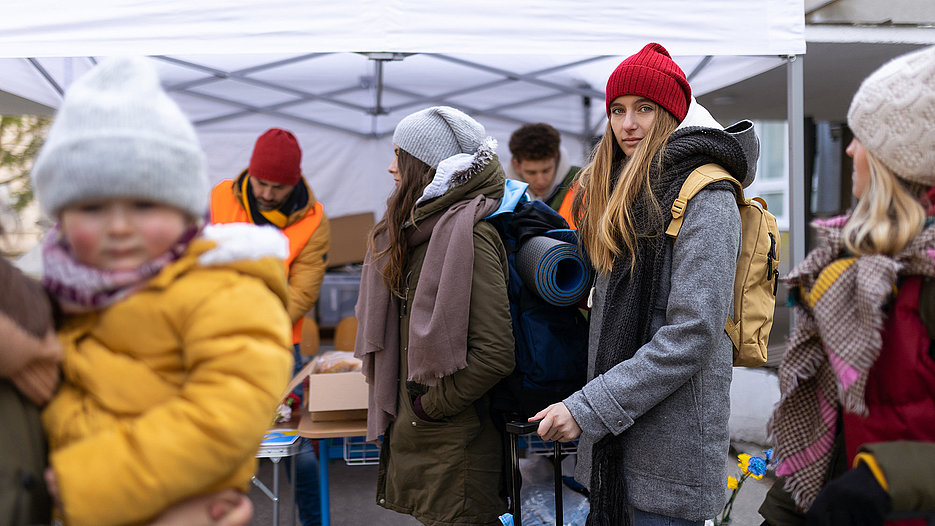 Millions of people are now fleeing the war in Ukraine, and several hundred thousands of them have found refuge in Germany. Once before, in 2015, Germany was the destination of a large-scale flight movement in the face of the civil war in Syria. How well prepared are society and policy-makers for the current situation? How does it differ from previous years? A conversation with Prof. Dr. Karin Scherschel, director of the Center Flight and Migration, about the perception of refugees and the tasks now awaiting administration and civil society.

Ms Scherschel, according to the UNHCR, up to date more than 3.5 million people have fled the war in Ukraine. The Federal Ministry of the Interior has documented roughly 220,000 entries of Ukrainian refugees to Germany. This number is rising daily. How is this situation different from the one in 2015?
One crucial difference is the legal context. The escape routes for refugees from Ukraine via neighbouring countries are largely open. At the European level, the so-called Temporary Protection Directive has been activated. It was introduced in the aftermath of the Yugoslav Wars, but is now being used for the first time in its history. When invoked, displaced persons can cut out time-consuming red tape and get residence permits for “temporary protection” without having to undergo an inspection of their individual claim to asylum. Under the directive, refugees are entitled to a direct access to the labor market, educational and social services and suitable accommodation.

Even within the group of currently displaced persons from Ukraine, differences are made. In principle, the Temporary Protection Directive also applies to people from third countries who are equally fleeing the war from Ukraine.
True. Austria, for example, applies stricter rules to people who are not from Ukraine, but happened to be there when the war broke out. They are granted entry on humanitarian grounds, but they have to apply for asylum. On this point, the EU directive contains only an optional provision, which can be amended by national law. Germany does not make this distinction.

How would you describe the current public opinion with regard to the refugees compared to 2015?
The refugees are perceived as Europeans who had to leave their country due to the Russian war of aggression. As a result, the refugee situation is far less controversial than in 2015/16. There is a common consensus that we are dealing with a humanitarian emergency of catastrophic proportions. This war is taking place in Europe and is being seen as a threat to the European idea. In contrast, the migration taking place in 2015/16 was only seen as a threat to Europe and its borders by parts of the political and social elite. It was the birth of the Pegida organization (Patriotic Europeans against the islamification of the Occident)!

Also, migration from Ukraine is markedly female - a big difference to 2015. It is mainly women and children who are fleeing, while the men have to stay in the country. Women and children are perceived as especially vulnerable and in need of protection. This also raises specific issues of care and access to the labor market. The willingness of the German population to help is great and is borne of compassion, but also of their own fear, since the war is taking place in Europe. Moreover, even before the war, the Ukrainian community in Germany amounted to 330,000 persons.

How well-prepared are the local authorities?
Our local communities are better prepared. In the course of the refugee movement of 2015, sustainable networks between public administration, aid organizations and volunteers have emerged, which are effective tools of coordination. These structures can be reactivated. Migration has become a core issue for municipalities. Many of them have introduced new formats on the issue, such as integration concepts, round tables and model projects.

What is the role of volunteering in dealing with the current challenge?
In principle, the willingness of the public to help is to be applauded! However, in our research on the situation of 2015/16 we have also found evidence that some volunteers were burning the candle at both ends. They ended up feeling left alone and seeing themselves as the stopgaps of socio-political needs that the state failed to provide for. This means that structures as well as insights from the 2015/16 mass influx of immigrants can be reactivated. However, one of these insights is the fact that civic bonds must not be overstretched. Rather, we have to complement civic society infrastructure and support it, but at the same time protect it. After all, full-time professionals in these fields do not have a degree in social work or psychology for nothing, but to get the skills they need to deal with crises while protecting themselves. For me, as a rule, it is problematic, if civic society and volunteers permanently keep taking on responsibilities of the state - and this not only applies to flight and migration. This might happen in an acute crisis, but it can never be a long-term goal. Volunteers must not be used to fill structural holes in social policy. They can complement these structures, but never replace them. There is now a good awareness for the issue among volunteers.

It is certainly a positive example when families volunteer and offer a home to displaced persons. Nevertheless, the private sphere is a space that is not visible to the state. The more displaced persons there are, the less the question of accommodation may rely on private efforts. The state will then have to either provide accommodation or support volunteers who take in people. By the way, specifically on this aspect, our research at the Center for Flight and Migration shows that it is important to avoid pooling a high number of refugees in one place such as the AnKer-centers.

Basic services are generally within state responsibility. This also includes access to the labor market or education. These services have to be provided by the state. Volunteers can give low-threshold support but they cannot take on professional or sovereign tasks.

In view of the unforeseeable end of the war and the future of Ukraine, the question arises: Where does acute protection from the armed conflict end and integration begin?
Integration begins with that protection! With protection comes participation. It is vital to approach people according to their needs. This begins with psychosocial support. At the moment, it is mainly women and children who come to us, so we have to ensure that they are provided with daycare places and integration into schools. In addition, many of the women were working mothers in Ukraine, so we need language and integration courses to get them ready to participate in the labor market. The Ukrainian community in Germany can contribute to these efforts by sharing their experiences.

Refugees still keep dying on the short crossing of the Mediterranean to Europe. Do you think that the migration of displaced persons from Ukraine will lead to a rethinking of how we deal with refugees from other countries?
I would be very happy if I were wrong about this. But: No. There will be no change of the political trend in Europe. On the contrary, I fear that in the future states will point to the limits of capacity precisely with reference to the refugees they have taken on from Ukraine. Flight is perceived in very different ways. Flight can quickly become irregular migration. If you think back to 2015/16, there was a debate across all European countries about the threat to European borders and irregular migration. Syria, Afghanistan or Ukraine - these are wars and humanitarian catastrophies that cause suffering to millions and force people to leave their countries. But how the public perceives these conflicts varies greatly. Not all refugees are equal.