Geographers research the interdependency of glacier melting and sediment transport 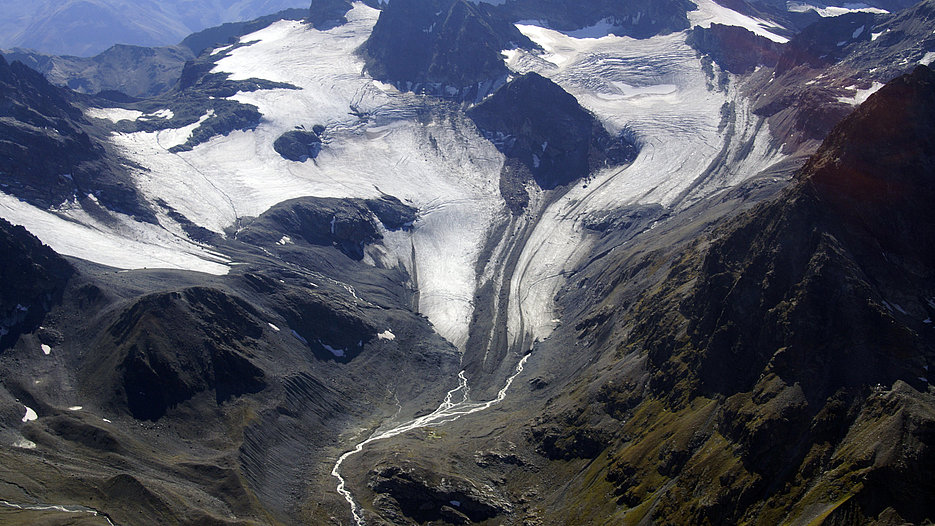 The massive glacier retreat in the alpine areas as a consequence of climate change has a noticeable side effect: Due to melting glaciers and increasing rockfall activity, more and more debris and sediment deposits build up at glacier tongues. These sediments are transported to lower areas by glacial streams, where they can cause reservoirs to silt up or provoke mudslides. Over the next three years, the Chair of Physical Geography at the Catholic University of Eichstätt-Ingolstadt (KU) will be investigating the interplay of glacier melting and transport of sediment in the context of a German-Austrian project called “Hidden Ice”.

The joint collaborative project is part of the “Earth System Sciences” research program of the Austrian Academy of Sciences. It receives half a million euros in funding, 100,000 euros of which are provided to the KU. The project is led by the Academy’s Institute for Interdisciplinary Mountain Research and involves researchers from the University of Natural Resources and Life Sciences Vienna, the University of Innsbruck and the Innsbruck-based Environmental Earth Observation IT GmbH in addition to KU participants.

Climate monitoring over the last decades has shown that temperatures have risen significantly worldwide. In the alpine area, this increase is almost twice as high as the global average; a fact which can be seen from major changes in the glaciers and permafrost regions. “In general, areas in transition from glacial to non-glacial conditions are very unstable and prone to erosion and produce a large amount of sediments which are transported in high alpine streams and rivers”, explains Dr. Florian Haas who manages the Eichstätt sub-project together with Prof. Dr. Michael Becht and Dr. Tobias Heckmann.

The project title “Hidden Ice” implies the special characteristic of glaciers, as glacier tongues are covered in debris and thus melt more slowly that ice fields which are not debris-covered. In addition to the mapping of all Austrian glaciers which are currently characterized or have been characterized by an above-average amount of sediment in the past, the researchers also plan to carry out a very detailed temporal and spatial study on sediments and remobilization of sediments through transport in mountain streams at the Jamtalferner/Silvretta in order to find out what happens to the sediments.

Amongst others, researchers will investigate how much debris and rubble could potentially be transported further in glacial streams. Furthermore, they will analyze the grain size of the sediments on the glacier’s surface and the edges. They will use drones and laser scanning technology in helicopters over a project period of three years in order to record changes in the sediment volume. Current data thus gathered will be additionally substantiated by reconstructing the development of the glacial stream at the Jamtalferner using historical maps, records and pictures. Project work at the KU will mainly concentrate on drone pictures and 3D laser scanning with helicopters as well as the analysis of the images.