Students investigate use of German dialect in Southern Brazil 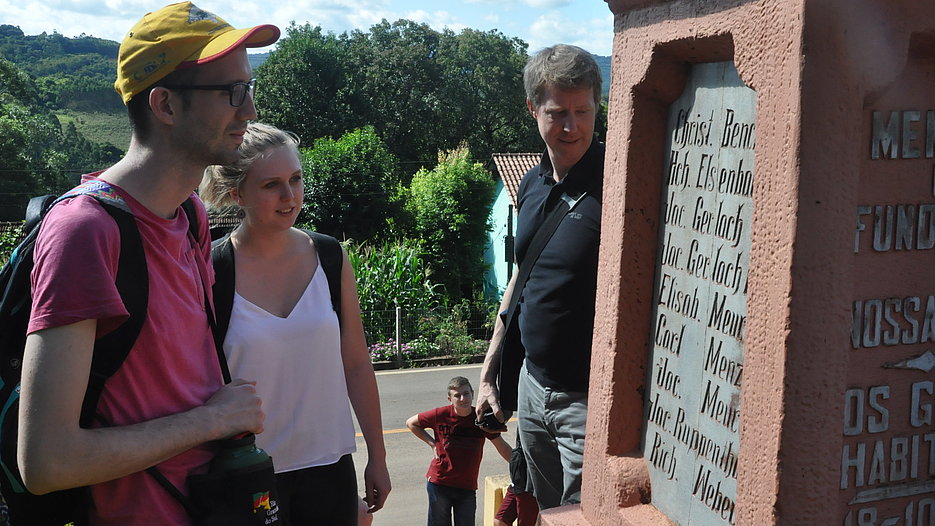 Travelers in Brazil might encounter people speaking a German dialect in some regions of the country: Until today, descendants of emigrants still use a dialect referred to as ‘Hunsrückisch’ which is based on dialects used in Rhineland-Palatinate but only exists in Brazil in this particular form. Students of the Catholic University of Eichstätt-Ingolstadt (KU) now investigate, how the dialect with German roots has developed over time in Brazilian everyday-life and which significance it has today. On their two-week study trip to the state of Rio Grande do Sul, they carry out their research together with Prof. Dr. Sebastian Kürschner (Chair of German Linguistics) and other lecturers. Before starting out on their journey, they had discussed theoretical and methodological approaches to language contact and migration research in a seminar.

In the middle of the nineteenth century, Brazil experienced peak immigration from Germany, as many people had no longer any perspectives for earning a living at home. In those times, Brazil sent spokesmen across the nation promising immigrants a better life on the other side of the Atlantic Ocean. “It is interesting to see that in those days, the families of those interviewed did not come to Brazil from what is today known as Rhineland-Palatinate, but primarily from Bohemian areas. But even these groups of people adopted the ‘Hunsrückisch’ dialect as compensation dialect which was used by German immigrants in Brazil to communicate irrespective of their regional origin; this was also a sign of cohesion”, explains Prof. Kürschner. This means that Germans came into contact both with the Portuguese language and ‘Hunsrückisch’ upon their arrival in Brazil. By contrast, the Northern Bohemian dialect is barely spoken in the country today.

The Brazilian doctoral candidate Angélica Prediger, who has German ancestors herself and who already carried out research on the presence of German dialects at the Federal University of Rio Grande do Sul (UFRGS), helped the young scientists in finding suitable conversation partners for their studies. Angélica’s home university currently develops a map on the linguistic minority in Southern Brazil. Professor Kürschner has been in close scientific collaboration with Brazilian researchers for many years.

The group of eleven students from the subject areas of German Studies, Latin American Studies, Psychology and the Master’s degree program in Conflict, Memory and Peace offered by the KU Center for Latin American Studies worked together with Brazilian students and spoke to approx. 100 people during their research stay. They met with small groups of expat descendants and their families to ask questions which they had previously developed in a standardized guideline covering topics such as family history and language use: How do you say “potato” in ‘Hunsrückisch’ (“Areppel”) or how does the number 15 sound when spoken in dialect (“fimzehn”)? In addition, they also approached people in the street spontaneously and recorded the interviews in order to be able to document the sound of the language.

Participants of the study trip kept their eyes peeled and often discovered company signs with German names and tombstones bearing German inscriptions; however, signs are not generally bilingual. “The tradition of the German language in this context is clearly primarily oral”, says Kürschner. This also becomes evident in the way the language is passed on: “Most people we interviewed never attended official German lessons. It is important to mention in this context, that such lessons were even illegal in Brazil around and after the Second World War”, added Julian Hanowski, KU student in the Latin American Studies degree program, who also participated in the study trip. This means that the dialect was passed down to following generations in private. The question of how this fact influences people’s own identity is dependent on several different factors. Portuguese is seen as the language of social advancement, which means that ‘Hunsrückisch’ is barely present in the professional lives of people. “The direct environment also strongly influences peoples’ proneness to use dialect: It is used more often in remote areas than in large cities, where people only use it within the family. However, appreciation for the language of the ancestors is on the rise again.”, says KU student Franziska Prinz. Franziska and her fellow students thought it was exiting to be directly involved in a research trip. In addition, participants also had the chance to not only visit the UFRGS but also the Center of German and European Studies during their stay.

Now, the students and their supervisors still have a large amount of transcription work to do: They have to transcribe and analyze 200 gigabyte of recordings. In a next step, Prof. Kürschner intends to use the findings of the study to carry out a follow-up project focusing on linguistic aspects of Bavarian and Bohemian immigrants in Brazil. 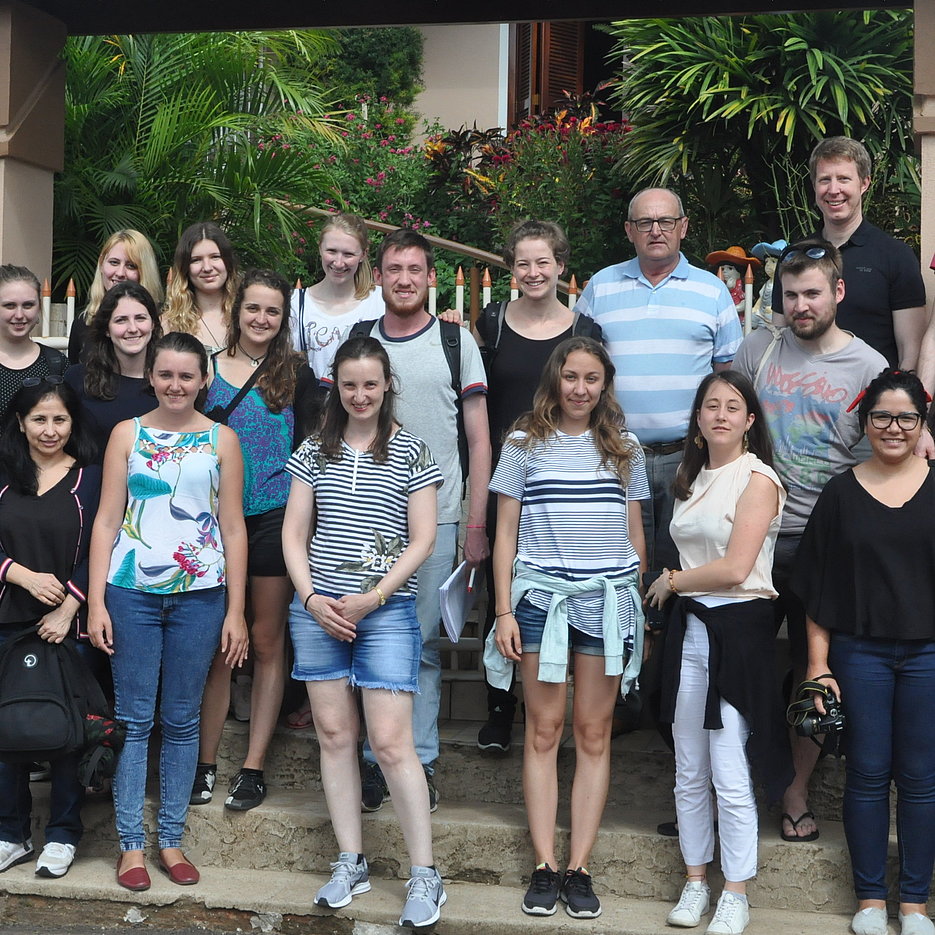 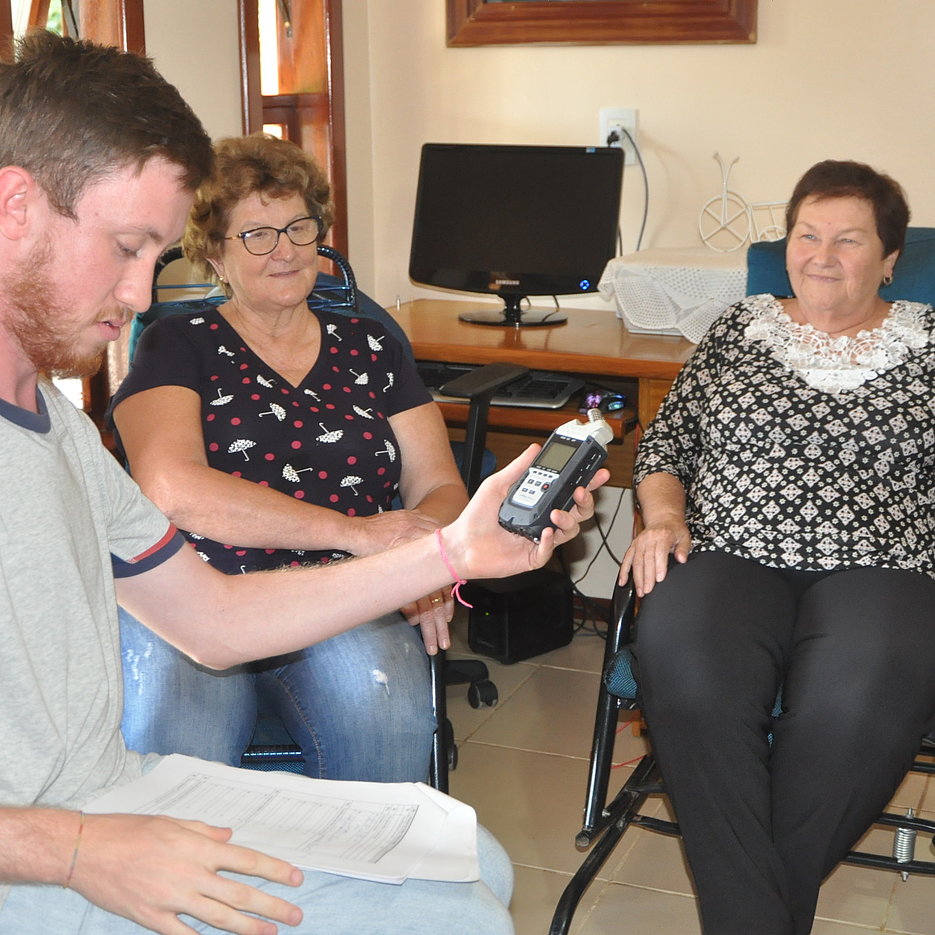