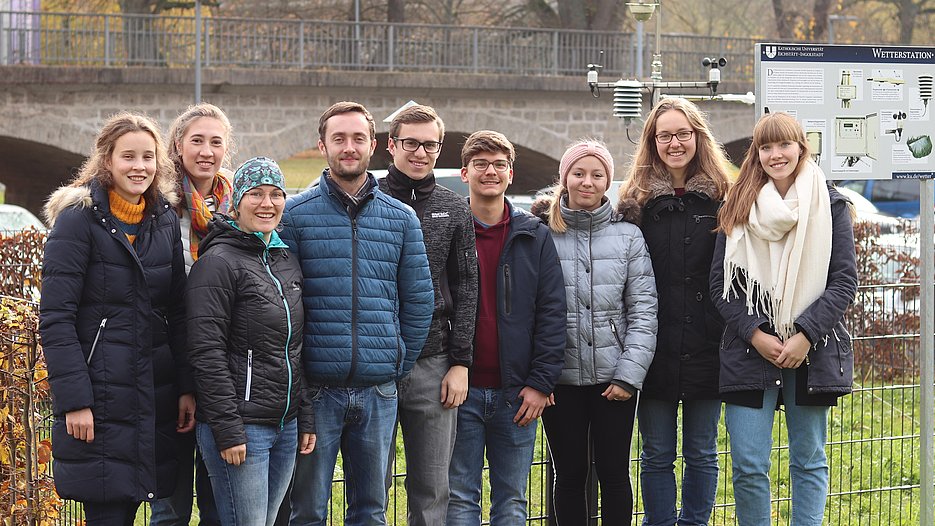 Although winter holds the region in its firm grip these days, experts are recording rising temperatures in the long term. This is also confirmed by measurement data collected at the weather station on the Eichstätt KU campus in retrospect for the year 2020. Headed by geography student Ulrike Richter and supervised by Professor Dr. Susanne Jochner-Oette, students of the working group "Wetterschau" continuously evaluate the data obtained and check the functioning of measuring instruments. The result for 2020: "Last year was the second warmest year in Eichstätt since the beginning of the official series of measurements, which go back to 1951 for the nearby station of the German Meteorological Service (DWD) in the district of Landershofen", says Professor Jochner-Oette. In the whole of Germany, too, the year 2020 (10.4 °C) ranks second after the record year 2018 (10.5 °C).

"This year, we determined an average annual temperature of 10.4 °C", explains Ulrike Richter. When comparing this value to the official climate reference period (1961-1990), we see a warming of 2.5 °C for the entire year 2020. While the past winter of 2019/20 was rather mild, temperatures dropped to the annual minimum temperature of -7.5 °C on November 30, 2020. The year before, this was not observed until the end of December. Freezing days, i.e. days on which the temperature drops below 0 °C, occurred 97 times in 2020, compared with only 88 days of freezing the year before. The lowest temperature in Germany was recorded at Funtensee in the Berchtesgadener Land region at -31 °C.

In the night from February 9 to 10, 2020, a storm named Sabine hit Eichstätt, causing strong west winds of around 50 km/h and around 100 firefighting operations throughout the district. The storm was caused by so-called westerly weather conditions, characterized by a low-pressure area over Scandinavia and a high-pressure area over the Azores. The heavy precipitation from mid-February caused the level of the Altmühl river to rise to such an extent that the river even overflowed its banks in mid-March. The highest water level was reached on March 13, 2020, at 2.89 meters.

The students took an even closer look at the rainfall: The annual total was 664.6 mm, which is about 90 mm more than the year before, but still significantly less than the average for Landershofen (773 mm). The month with the most rain was June with 134.8 mm. In addition to February, the summer months of June and August were wetter than the reference period.

Furthermore, the temperature data provided for interesting insights: Temperatures climbed to a maximum of 36.6 °C on July 31; the previous year's value was 39.19 °C on July 25, 2019. "The fact that the summer reached fewer records than the previous one can be seen well when looking at the climatological key values", explains Ulrike Richter. Thus, although there were more summer days (days above 25 °C), there were fewer hot days (days above 30 °C). In Bavaria, there is also another important reference value: the ‘beer garden day’. These are days on which the temperature is still at least 20 °C at 8 pm. In Eichstätt, it was only possible to comfortably sit outside on nine evenings in 2020; in 2019, this was possible on 22 days. In return, 2020 offered around 60 hours more of sunshine. Overall, all months were warmer than the reference period: February led the field with an average temperature that was almost 5 °C higher.

In particular, the interplay between temperature and precipitation is crucial for vegetation. The number of so-called vegetation days (average temperature higher than or equal to 5 °C) has remained relatively constant over the last few years at around 250. "However, especially extreme values have to be considered in order to assess the vitality of vegetation", explains Professor Jochner-Oette. The students of the working group will also devote themselves to this topic area in the future, especially in the context of climate change. To this end, they will, among other things, continue the series of measurements in order to investigate long-term developments in weather and climate.

More information and the current measurement data is available online at www.ku.de/wetter.