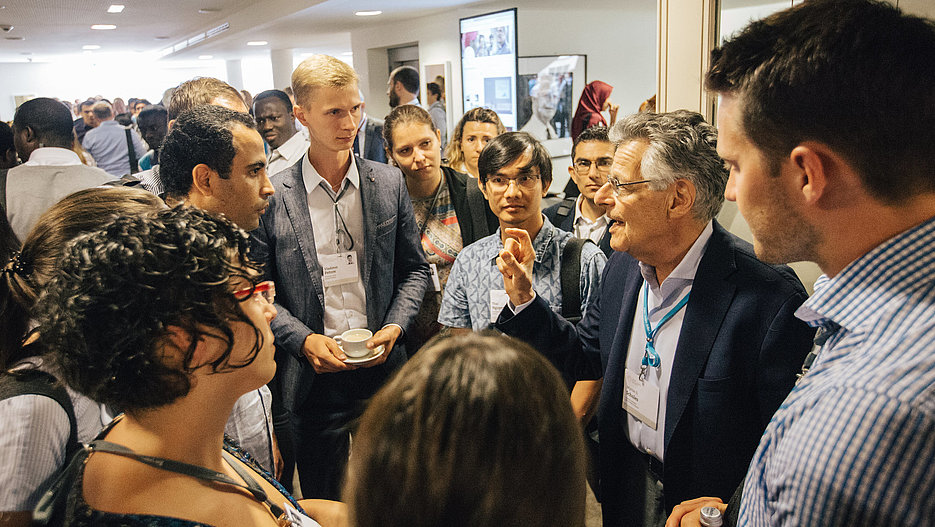 Two doctoral candidates at the KU Ingolstadt School of Management now get the rare and honorable opportunity for personal and professional exchange with Nobel Prize winners: They successfully completed a multi-stage application process and are now on their way to attend the popular Nobel Laureate Meeting in Lindau at Lake Constance together with other highly talented young economists from all over the world. The top scientific meeting is held in Lindau regularly since 1951. It focuses on different scientific fields rotating between chemistry, physics and medicine. In addition, Nobel Prize winners from business and economics meet in the city at Lake Constance every three years.

Between August 23 and August 27, the two KU doctoral candidates Hartinger and Krug will discuss their fields of interest with the next generation of leading researchers and also get the chance to meet Nobel Prize winners during specialized presentations and in a casual atmosphere. The Lindau-based economists’ conference will welcome more than 400 young researchers from 69 countries and open up room for encounter with around 20 Economics Nobel Laureates.

It was originally planned that Katharina Hartinger and Philipp Krug already attended the 2020 Nobel Laureate Meeting for young researchers. Unfortunately, it was postponed due to the corona pandemic. The anticipation is even greater now, says Hartinger: “It’s a huge thing, everybody wants to be there! I was fired up right away.”

Hartinger, a research associate in economics, especially macroeconomics and Krug, a doctoral candidate at the Chair of Economics, especially Public Finance, were nominated by their supervisors Prof. Dr. Simon Wiederhold and Prof. Dr. Dominika Langenmayr, both of whom hold a chair at the Ingolstadt School of Management. According to Krug, being considered for participation in the conference alone is a great honor. “The right to propose attendees is relatively limited.” Krug admitted that his research stay at the University of California, Berkeley, had already given him a small taster of what was to come: He already met Nobel Prize winners back then, which only sparked his interest to attend a Lindau conference.

Now, the two young KU researchers get the chance to witness “the top-class in action” Hartinger says enthusiastically. “It is above all the personal exchange that attracts me. The whole conference will be a densely packed inspirational week.” She is especially looking forward to the mixture of expertise between the “older generation” and the motivational energy of fellow young researchers: “These people are highly ambitious and enjoy talking about things that really matter.”

Hartinger even gets the chance to present her research on the economic effects of individualism in a short presentation. She focuses on the cultural effects on education and innovation as well as the interplay between the individual and society as a basis for economic growth. “My absolute highlight was the invitation to participate in a panel discussion on the topic of ‘Social Change and Social Media’” where she will be discussing the topic with the three Nobelists Bengt Holmström, Joseph E. Stiglitz and Richard H. Thaler. “I am really looking forward to this immediate exchange on a current topic that is close to my heart, not only from a research perspective.”

Krug also shares the feeling of anticipation for discussions and inspiration on and beyond his specialization: He currently mainly approaches topics such as inheritance taxation and the question of how this tax can be designed from an economics perspective. “In general, this event is the perfect opportunity for exchange on current economic topics”, as participants have the chance to immerse themselves into areas with which they usually have little contact. Krug thinks that the casual atmosphere created at the event is a huge advantage: “Attendees can register for several special events. I put down my name for a lunch with Nobel laureate Robert Merton. His theories are standard in the curricula of introductory courses.”